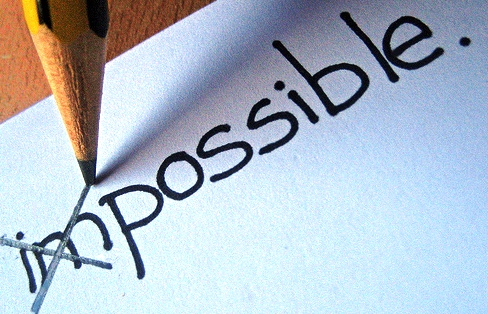 How to Make Achieving your Goal Inevitable

It’s easy to put things into momentum. We start off passionately, excited to take the first step towards our goals. The difficult part is keeping the fiery enthusiasm we had when we first started – and following through.

It could be a new habit, like going to the gym more often or getting started on a personal project. Perhaps you’re taking steps to become better at something, like improving your style or networking with professionals in your field. Maybe you want to work at learning a new language or how to play an instrument.

The term “new year’s resolution” has become dulled, and often met with skepticism. We start with grand goals, but then comes the stage where we don’t want to get our hands dirty.

Initially rough rituals become easy habits as long as we give them time to settle in. Yet we’re all faced with discomfort when we’re pushing ourselves harder than we’ve pushed before – stepping out of our comfort zones. How can we get past this seemingly endless plateau?

Put your money where your mouth is.

Take a look at this story.

How did two economists manage to lose thirty pounds in nine months, and keep the weight off for over four years?

John Romalis and Dean Karlan, two economists, adopted an ingenious arrangement for weight loss. When John and Dean were in graduate school in economics, they noticed that they were putting on weight, especially during the period when they were on the job market and being wined and dined by potential employers. They made a pact. Each agreed to lose thirty pounds over a period of nine months. If either failed, he had to pay the other $10,000. The bet was a big success; both met their target. They then turned to the more difficult problem of keeping the weight off. The rules they adopted were that on one day’s notice, either one could call for a weigh-in. If either was found to be over the target weight, he would have to pay the other an agreed sum. In four years, there were several weigh-ins and only once was either one over target (the resulting fine was paid in full immediately). Notice that as in the case of David’s thesis bet, Dean and John were acknowledging that without the bet to encourage them, they would have eaten too much, even though they still would have wanted to lose the weight.

You want to commit yourself to a goal?

If you’d prefer not to get anyone involved, there are services online that take the role of an accountability partner. If you’re at a loss for where to start, try http://www.stickk.com/. (It takes your money and donates it to a friend, a charity, or an organization you hate.)

Make your Goals and Resolutions Inevitable

The beauty of this method is its simplicity and its effectiveness. This system takes very little time and effort to set up. It has been proven to generate results, and will give you that extra boost of energy you need to take you closer to your goals.

If you’re really sure you want to achieve a certain goal, make it inevitable.

Sure, 2012’s starting to settle in and your new year’s resolutions may be on their way out. That doesn’t mean it’s quitting time! Re-commit yourself to a resolution you feel passionate about, or think carefully and pursue a goal you’ve always wanted to. Find a friend or set up your Stickk.com account, and finish what you started.