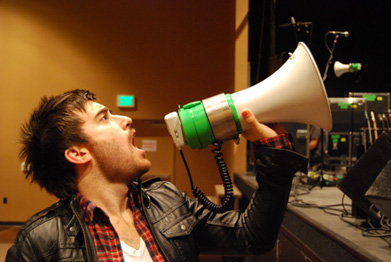 How is Your Vocal Projection?

All women want a confident man.

One of the surest ways to display confidence is by having a strong, clear voice that isn’t afraid of being heard.

You don’t have to sound like Barry White or Don LaFontaine (the man who does almost all of movie trailer voices today), but if you have a high pitched voice, it wouldn’t hurt to deepen it a bit more (to sound more masculine and strong), but not so much that it’s obvious you’re trying hard. More importantly though, you should talk in a volume that can move easily across a room, and in a clear tone that everyone can understand.

You’d be surprised how many guys have a problem with low volume, mumbling, or being monotone. It’s really not an area guys pay attention to or make an effort to fix.

Next time you’re in a social setting, look for the guys who have poor vocal projection. Pinpoint what it conveys about that person.

What impression would you have of woman you just met if she spoke in a weak voice that you could barely hear? Shy? Insecure?

It doesn’t matter what you say if people can’t hear you! Weak voices can give the impression of fear and anxiety, two impressions you don’t want to give.

Why Most People Aren’t Loud Enough

Most people speak quietly as a result of being brought up that way. We’re told from a young age not to be loud or rude, and respect the people around us. This is fine, but it doesn’t help with picking up women.

Almost anyone can speak louder. It’s nothing but a mental block that people have, not a physical one. You just have to become more comfortable projecting your voice.

When I was first working on my voice, I realized that the only thing holding me back was that I cared what other people thought of me. I worried that other people would listen in on my conversations. But I realized I was just being stupid and paranoid because I would never see these people again – why did it matter if they heard me? It was because I was always taught to be mindful of other people, and so I grew up talking in a “considerate volume.” Now if I see that people are listening, I know that they’re probably enjoying listening to my conversations anyway because they are chock full of entertainment and insight. Sometimes I catch people listening in and at the same time smiling, laughing, or nodding their head.

Don’t get me wrong, I’m not saying that you should be running around speaking in a unnecessarily loud volume. The goal is to just have strong voice that the person listening can clearly understand.

Do you frequently have people saying, “what?” or asking you to repeat yourself?

Whenever I tell my clients they need to increase the volume of their voice and project more, they feel as if they are yelling when in fact one wouldn’t even consider it “moderate” or normal volume.

We all have an idea in our own minds of what is loud and what isn’t. To quiet people, normal volume is like yelling to them.

I recently met a guy who had a booming voice that shot across the room. It wasn’t even that loud but just his normal volume. I was reminded of how much more I could still project my voice.

If you have a weak voice, it might even mean that you’re not talking enough throughout the day. Have you ever gone throughout a whole day without saying a word, and then all of a sudden you bump into a friend, only to let out a squeak of a hello?

If you’re at a party or a club, you have to speak even louder than you should during normal hours. I’ve seen men approach women with their weak projection, and then see them lean in and repeat themselves because the woman can’t make out a thing they’re saying…

Not only does this put the guy into the reactive role, but now she’s taking the role of being the one screening to hear what he has to say to her.

A man should be HEARD the first time. That way, she’s the one responding to HIM.

A caveat about clubs/bars: some guys may try to speak in an overly deep voice while in a nightclub. The problem with this is that a deep voice will often just blend in with the bass of the music in the club. You want a pitch that pierces through the thumping base, while not being too high in pitch. You can only gauge this through experience so go out and experiment.

What You Need To Do To Build Your Voice

Wherever you are, practice throughout the day. Whether it’s greeting a cashier or calling your friends while you’re driving, practice speaking in a clear and loud voice. Consistent practice is the only way to develop the habit of better vocal projection. This isn’t something you can just “turn on” when you’re in a club or out with friends. You have to warm it up.

To develop good voice projection, remember this principle: your strength doesn’t depend on your mouth or throat, but on your lungs. In other words, when people yell until their throat is sore and they can’t speak anymore, they’re just using their throat voice (just clanging their vocal cords together) and not using the air support they could for a full, strong voice.

To develop that support:

These exercises, done often, will increase your effectiveness both as a speaker and as a person as you increase your ability and capacity.

Warm up your voice before you’re going to need it. If you know you’re about to go into a noisy environment where you’ll have to shout to be heard — a noisy club, or a loud factory floor — do some humming exercises, or talk to yourself out loud, to get blood flowing to your vocal cords.

I just always remember to pick a target 25-50 feet away and “project” as though my voice was pitched for that object alone. You will be surprised at how much voice you have and how far it actually carries.

Also, remember that voice projection should depend on the size of the group and the topic being discussed. The smaller the group of people, the lower the volume should be.

Do You Sound Too Monotone?

The clients I have met that DO actually have good volume, and talk in a clear voice, usually still have the small problem of speaking without emotion.

If you have a problem conveying emotion in your voice, remember that fluctuation is key.

Move the PITCH of your voice, when you talk. Make some words HIGHER pitched, others lower. That means that some parts of each phrase should be LOUDER, with emphasis, and others softer.

Finally, fluctuate speed to draw listeners in, with pauses and lengthening words.

If you want a better idea of what you sound like to other people, simply record your voice to a recorder or a video camera. This helped me a lot when working on my voice tonality and pitch.

Focus on the way Al Pacino projects his voice in the beginning of this clip. He’s actually speaking in a pretty normal volume. He only starts to raise his voice as everyone else in the room gets louder. And despite his signature hoarse and raspy voice, notice how it resonates. You can tell that his voice isn’t coming from a small air pocket in his throat, but from the depths of his core.

This is the kind of vocal projection that defines an alpha male who not only leads an interaction, but literally draws others in with his voice.

Go out and make it a habit to practice speaking more clearly with friends. By doing this, you’ll build a voice that displays a confident attitude – one that shows that everything you say is worth being heard.

This is what TOTAL image development is about.