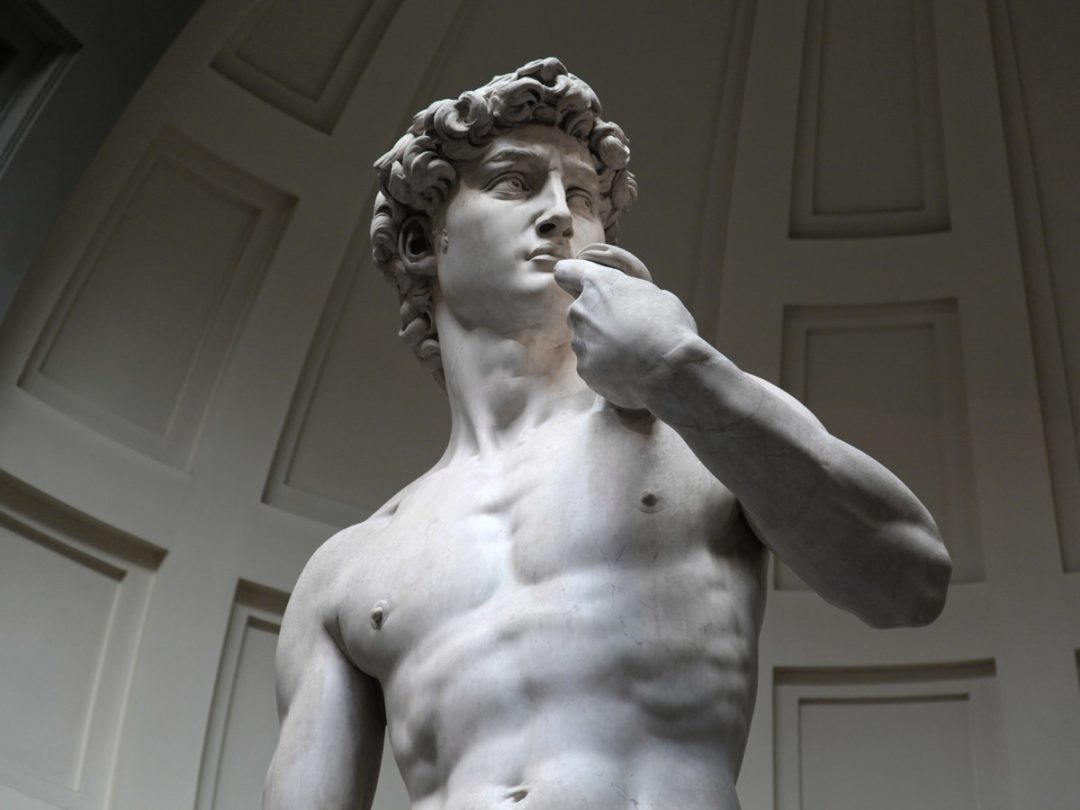 Body language is one of the most overlooked aspects of style and image. The tricky part is that it’s a largely invisible part of your image. We’re much more aware of the clothes than the body that’s wearing them, so it can be easy to skip over and (unfortunately) most men do. Even with the highest quality clothing, you can still look shy and insecure with weak body language.

This is a huge mistake because body language is one of the simplest things you can fix and the results can be incredible. Make just a few simple tweaks to your body language and posture can have a profound impact on all of your social interactions from business to dating and more.

Developing good body language is one of the most effective ways to change how people think of you. Having good command over your body allows you to communicate a wide arrange of emotions non-verbally and can help re-inforce the kind of image you’re trying to build with your fashion.

If you’ve never considered working on your body language, then you probably have weak or undeveloped body language right now. Don’t feel bad. Most guys do, myself included! It’s taken years to fix some of my worst body language habits, and I still correct myself often when I notice I’m making a mistake with my posture.

Below, I’ll talk about the different aspects that create good, confident body language and give some ideas for correcting bad habits using my own experiences.

The best way to fix this is by developing a thorough understanding of posture, body language and non-verbal communication so we can be more aware of which emotions we’re sending out through our bodies.

A great example of highly controlled and well-directed body language is the following video by famous Pantomime Marcel Marceau.

Mimes and dancers are masters of expressing complex emotions and situations solely with body language and movement. Their art requires a very skilled control of posture, movement and facial expression because they’re not allowed to use words while performing.

As an exercise, try to mimic some of the movements and expression Marcel uses in the above video. You’ll probably find yourself tapping into muscles and positioning you’ve never used before.

The way you position your body, arms, legs and head can cause emotional responses in people you’re interacting with. Your positioning can generally be broken in two categories: closed and open.

Being shy and introverted as a teenager, one of my biggest issues was a bad habit of avoiding direct eye contact with people I was unfamiliar with. To fix this, I spent several days in New York City walking all over Manhattan, with a rule that if I made eye contact with someone else, I wasn’t allowed to be the first to break it. I would have to hold eye contact until the other person looked away. This was a very uncomfortable exercise at first, but the more I did it, the more natural holding eye contact became.

Typical closed body language includes crossed arms or legs, avoiding eye contact and tilting your head down or away from the people you’re talking to. Closed body language can indicate a feeling of being threatened, or an attempt at defending ourselves from aggression. It can communicate that we do not feel comfortable in the present situation and are attempting to hide or escape from it. 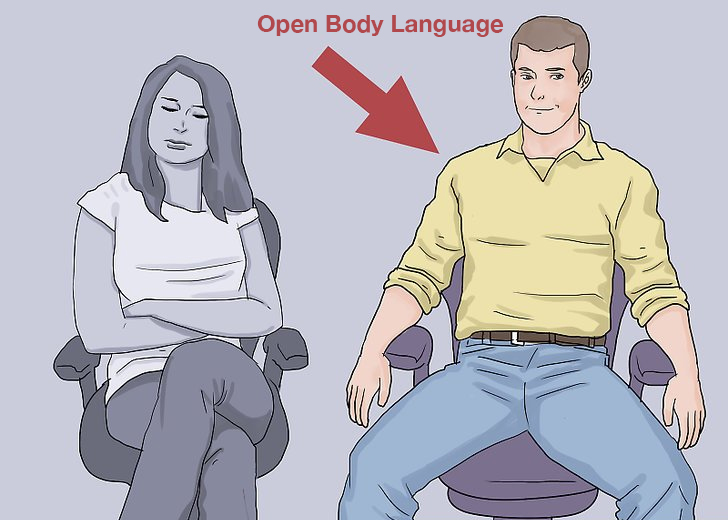 In general, you want to avoid closed body language and keep yourself as open and inviting as possible. This will make you more approachable and also disarm people when you’re talking to them for the first time.

Holding a drink in front of your chest is another common example of unconscious closed body language that most people engage in. It may seem totally normal, because this is how most people hold their drinks, but it’s similar to crossing your arms in front of your chest and can communicate closure or defensiveness in a social environment like a club, bar or dinner party. A better move is to hold your drink at your hip and keep your arms down and away from your chest.

I grew up spending a lot of time in front of computers and, as a result, my posture was quite poor. I tended to slouch over and wouldn’t stand up straight. Fortunately, my mother had a lot of training in acting and Alexander Technique, so she was able to offer advice and help me correct some of my most obvious issues.

Alexander Technique is a type of body work named after it’s creator, F.M. Alexander. Alexander was a Shakespearian actor who developed voice loss when speaking in public. After observing himself in mirrors, he traced the cause of his voice loss to poor posture and muscular tension that would arise whenever he was about to speak. He hypothesized that this was happening unconsciously as a result of bad body usage habits he’d developed over the years.

To break these habits, Alexander stressed the importance of spatial self-awareness (paying attention to your body and how it’s moving in the environment you’re in). Many of our bad habits with posture and body language are totally unconscious. We need to make an active effort to correct them, so it’s important to regularly reflect on how you’re sitting, standing or moving.

A good way to remind yourself to pay attention would be to write the word “posture” on your hand. Whenever you look at your hand, you’ll be reminded to check your posture and relax any muscle tension, correct slouching and open your body language. With practice, you’ll begin checking in regularly to make sure you’re keeping correct posture and open body language. You won’t need the visual reminder any more.

In addition to keeping body language open, it’s important to correct signs of insecurity or low self-confidence. A common example is slouching instead of standing up straight. This clip of Christopher Reeve in Superman is an excellent example of how a simple posture adjustment can convey a tremendous amount of confidence and make you more attractive.

There is an Italian term, contrapposto, used to describe a highly dynamic pose commonly used in painting, sculpture and acting. Contrapposto literally means “counter pose” and describes a stance where most of your weight is on a single foot, causing the shoulder and arms to twist off-axis giving both a relaxed and dynamic feeling. 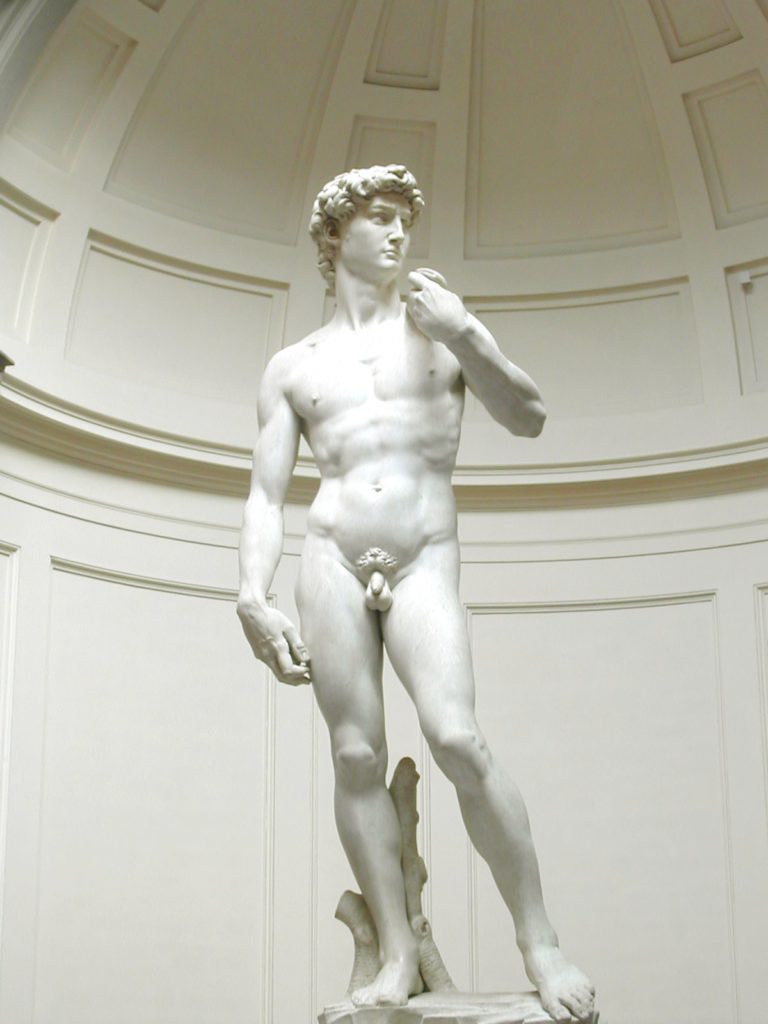 A contrapposto stance is very aesthetically pleasing and commonly used in sculptures and paintings. The statue of David is a classic example of the human body positioned in contrapposto. Actors often pose themselves in this way to make their performance more dynamic and exciting.